Each year the members of the Association of European Postal Operators (PostEurop) issue stamps on a common theme to present the identical values of the member states and the importance of philately. The “EUROPA stamp” is still one of the most popular themes for collectors, and issues bearing the official logo are among the most sought-after new stamps. The member countries chose bridges to be the theme for 2018 in order to present shared values. Seventy thousand copies of the Hungarian miniature sheet consisting of two pairs of stamps designed by the graphic artist György Kara were produced by the banknote printing company Pénzjegynyomda Zrt. The new issue will be available at first day post offices and Filaposta in Hungary from 2 May 2017, but may also be ordered from Magyar Posta's online store. 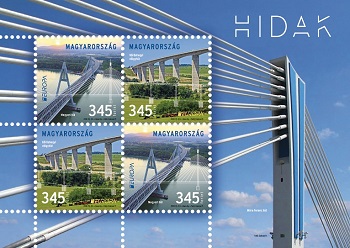 Apart from their functionality, bridges built in every age and every country have always been symbols of cohesion, connectivity and relationships. The advantages they offer are tangible, and, depending on their size, they support the development of communities or whole regions. Many bridges incorporate outstanding architectural solutions, and due to their spectacular appearance form an impressive part of their environment.

The first stamp features Megyeri Bridge, which is 1,861 metres long and is Hungary’s second longest bridge and the longest bridge over a river in the country. Horizontally, the bridge is composed of five dilation sections: two end parts, which stand in flood areas, the central section on Szentendre Island, and two other parts which span the main branch of the Danube and the Szentendre branch of the Danube. The 600 metre long structure with a 300 metre central opening over the main branch of the Danube is the first cable-stayed bridge in Hungary and its 100 metre tall pylons form large letter “A”s. In one leg of the pylon there are stairs and in the other a lift. The bridge was built as part of the northern sector of the M0 ring motorway around Budapest between 2006 and 2008. The outstanding engineering achievement is a worthy member of the family of bridges over the Danube.

The other stamp presents Kőröshegy Valley Bridge, which is 1,872 metres long. This is currently Hungary’s longest bridge and is located on the section of the M7 motorway running along Lake Balaton near Kőröshegy and Balatonföldvár. The 17 arched, pre-stressed monolithic concrete structure was built between 2004 and 2007. The span between the pillars is 120 metres and the tallest pillar is 80 metres high. There are stairs in every pillar and a lift in two of them to facilitate inspecting the bridge. As a result of a 3% incline, there is a 53 metre difference in height between the two ends of the bridge. Taking account of environmental considerations, all the rainwater from the bridge is collected and treated in several stages before being allowed back into the natural surroundings. It is a unique and remarkably impressive feat of civil engineering.

In the selvedge of the miniature sheet a detail of Móra Ferenc Bridge over the river Tisza to the north of Szeged, which was constructed as part of the M43 motorway, can be seen. Megyeri Bridge and the inscription HIDAK, meaning bridges in Hungarian, appear on the first day cover in a composition featuring the “A” shape of one of its pylons as the letter “A” in the Hungarian word. A schematic drawing of Pentele Bridge, often referred to as Dunaújváros bridge, linking Kisapostag and Dunavecse, provides the basis for the graphics of the special postmark.