Magyar Posta is celebrating Christianity’s most important feast, Easter, by issuing a definitive stamp. The self-adhesive stamp with no value indication, bearing the inscription “Domestic”, was produced by Pátria Nyomda based on the design of the graphic artist Edit Szalma. The new issue will go on sale from 2 March 2018 and from that date will be available at first day post offices and Filaposta in Hungary but may also be ordered from Magyar Posta’s online store. 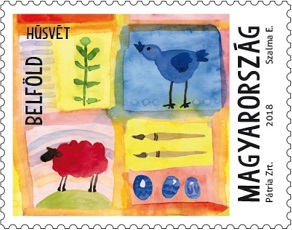 The Christian Easter grew out of the Jewish holiday of Passover in the Old Testament, whose fulfilment in Christian teaching is the passing over of Jesus Christ from death to life in resurrection. Jesus was sentenced to death by Pontius Pilate on Good Friday before the Jewish Easter and, having risen from the dead, he appeared to his disciples at dawn on Sunday.

On the stamp painted in watercolour as well as on the first day cover and the special postmark, symbols associated with the celebration of Easter, such as a branch of pussy willow, a chick, eggs and brushes used for egg painting, are depicted. In Hungary’s climate the willow branch replaces the palm branches that were waved by the crowd welcoming Jesus on his entry into Jerusalem. In commemoration of this event, pussy willow branches are consecrated on Palm Sunday, which are then kept by the believers in their home, often placed behind a picture. It was thought that, when placed under the eaves, it would protect the house from lightning and was also used to cure certain illnesses as it was believed to have healing power.

The egg itself is one of the oldest types of food traditionally eaten at Easter, an archaic symbol of rebirth and life. Just as new life springs from an egg, Christ rose from the grave as the Redeemer. The rich customs that evolved in connection with the consecrated egg at Easter included the tradition of the egg as a symbol of fertility. An old folk custom connected with Easter Monday is dousing girls with water (today spraying with perfume) and in return giving painted eggs as a gift. The basis of this is the belief in water’s power of purification and to bring fertility. The egg together with the bird that hatches from it symbolises the rebirth of Christ.

The Easter lamb is the prefiguration of the sacrifice of the Redeemer. The Israelites of the Old Testament were instructed by God to sacrifice a one-year-old lamb and wipe its blood on the doorpost to avoid the wrath of God. The Easter lamb, as a symbol, can both be connected to the fact that lambs come into the world in spring as well as to the religious tenet that Jesus Christ died on the cross to save humanity as a sacrificed lamb. For this reason he is called the Lamb of God to this day.

Festive greetings in four languages decorate the edge of the sheet of 50 stamps, which can be removed from the backing sheet of paper.