THE FIRST M40 LOCOMOTIVE ENTERED SERVICE IN HUNGARY 50 YEARS AGO

The stamps are available in our webshop as well.

Magyar Posta is commemorating the 50th anniversary of the entry into service in Hungary of the first locomotive in the M40 diesel-electric series by issuing a special stamp. The M40 locomotive depicted in the design of the stamp, on the first day cover and on the postmark went by the nickname Humpy. Source material for the issue was provided by the Hungarian Museum of Science, Technology and Transport. Two hundred thousand copies of the stamp designed by the graphic artist Zsolt Vidák were produced by the Pénzjegynyomda printing company. The new issue is available at first-day post offices and Filaposta in Hungary from 8 July, but may also be purchased from Magyar Posta’s online store. 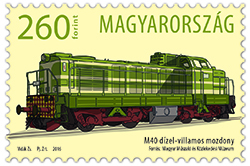 The M40 diesel-electric series was made by Ganz-MÁVAG for the Hungarian State Railways between 1963 and 1970. The locomotive was nicknamed “Humpy” because of the shape of the cab rising above the rest of its body.
When it was created, the locomotive was considered a good vehicle that was world class in numerous respects. Modified versions found buyers in Cuba and Egypt. As the vehicles were built at different times with differing technical specifications, their maintenance was not efficient. For this reason from the 1970s onwards, certain parts were converted to make servicing them easier.
The paintwork of this series was one of the most attractive of its era and the dominant colour was dark green. The front behind the buffers had a distinctive reddish brown and yellow diamond pattern, and cream lines of varying width ran along the sides, ending in an elegant shape on the front. When the Hungarian State Railways unified the paintwork of its rolling stock, the locomotive’s colours were changed. The chassis first became light grey and later dark grey, the cab and engine housing vermilion, and the front yellow.
Due to the increasing use of electric traction in the 1980s and the decline of demand in transport in the 1990s, the area of use for M40 locomotives was considerably reduced. In 1992 the gradual scrapping of the series began. Humpies still in service can most frequently be seen in the Záhony and Hatvan area.