Magyar Posta is commemorating the 450th anniversary of the proclamation of the law on religious freedom in Transylvania by issuing a commemorative card. The card designed by the graphic artist Imre Benedek was produced by Pátria Nyomda, and will be available at Filaposta in Hungary from 31 August 2018 and can also be ordered from Magyar Posta’s online store. 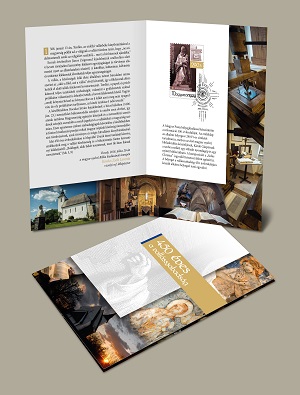 Religious tolerance was unknown in medieval Europe and every divergence from the teachings of the Roman Catholic Church was regarded as heresy. The leading figures of the Catholic Church at the time still believed that freedom of conscience and tolerating people of other faiths was the invention of Satan, whose aim was to raise doubt in people and weaken their belief.

This approach was not changed by the appearance of Reformation but nevertheless this had major consequences that affected the lives of many people. It caused the outbreak of religious wars lasting for decades. Eventually, it became clear that neither party could convince the other or force it into submission, so some form of coexistence had to be agreed.

The Diet of Torda held in Transylvania between 6 and 13 January 1568 declared: “Preachers everywhere shall preach and explain the Gospel each according to his understanding, and, if the community is willing to accept it, good; but, if not, no one shall compel them to do so [...] they shall have a preacher whose teachings they approve. Therefore neither the superintendents nor anyone else shall mistreat the preachers and no one shall be reproached for his religion [...] for faith is the gift of God...”

For the sake of clarity, it ought to be added that this freedom applied to four Christian denominations: the Catholic, Reformed, Evangelical and Unitarian Churches. This major religious policy decision was the result of lengthy political deliberations and compromises, a process that took several Diets to complete. Transylvania became the land of religious freedom and religious tolerance, offering refuge to people fleeing from other countries. The Transylvanian legislative body surpassed the principle “whose realm, his religion” established by the 1555 Peace of Augsburg and created peaceful inter-denominational relations, the likes of which were only achieved in Europe eighty years later through the Peace of Westphalia in 1648 concluding the Thirty Years’ War. With this law, Transylvania was the first in the world to declare its commitment to religious diversity, thus starting a slow process moving over many centuries from religious aggression and acquisition of land towards the personal conviction of the individual.