Magyar Posta is issuing a commemorative stamp to mark the joyful event when Flórián Albert (1941-2011) was awarded the Ballon d’Or 50 years ago. Two hundred thousand copies of the stamp designed by the graphic artist Barnabás Baticz were produced by ANY Security Printing Company. The new issue will be available at first day post offices and Filaposta in Hungary from 15 September, but may also be ordered from Magyar Posta’s online store.

Football has been the most popular sport in the world for many long years. The rules are simple and widely known – everyone understands the game and a great many people take part in it either as players or as fans.Every country and every age has had outstanding players whom fans follow, cheer for and admire, and who are everyday conversation topics. 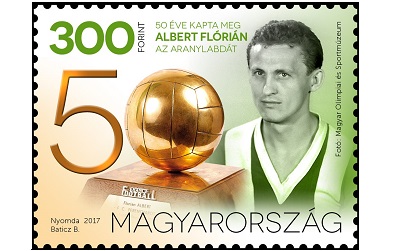 In Hungary in the period following the early 1950s when the Mighty Magyars, the Golden Team, assailed the peaks of the sport, the question arose of whether there would or could ever be a new generation – or even a single player – who would be able to play football to such a high standard again.
Out of this new generation Flórián Albert appeared at the end of the 1950s as the first footballer with outstanding skills. He played for the same team, Ferencváros, for the whole of his career between 1952 and 1974. He was the top scorer on three occasions and won four Hungarian league championships and one People’s Republic of Hungary Cup. He was a member of the team which won the Fairs Cup, the forerunner of the UEFA Cup, defeating the Italian team Juventus 1-0 in 1965. He was chosen Footballer of the Year in Hungary in 1966 and 1967.
He scored 31 goals in 75 matches for the national team. He was part of the national side that won the bronze medal at the Rome Olympics in 1960 and also played in the team that finished third in the European Championship in Spain in 1964. He also played for Hungary in the World Cup in Chile in 1962 and in England in 1966. In the World Cup in Chile he was equal top scorer with 4 goals, and in the World Cup in England the whole world was captivated by his brilliant play. He was selected for a European team in 1972 and for a World eleven in 1968 and 1973. The “Emperor”, as he was often referred to, scored a total of 391 goals in 539 matches.
He achieved the greatest recognition of his career in 1967, when he won the award founded by the paper France Football, the Ballon d’Or, the only Hungarian to do so. This was the most prestigious individual trophy in football, which was presented to the footballer who performed best. In the citation he was described as an almost unsurpassable figure technically and tactically.
Flórián Albert dribbled amazingly and his shots gravitated towards goal, yet he was also able to create situations as a playmaker who understood the whole field of play. He was a natural talent whom it would not be a platitude even today to describe as an artist with the ball.