Magyar Posta is presenting the collections of Hungarian museums on special stamps. 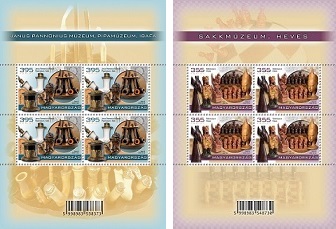 On the denominations issued in the series in 2016, some of the highly prized treasures of the Chess Museum in Heves and the Pipe Museum in Ibafa showing a collection on the history of smoking, part of the Janus Pannonius Museum, are featured. The new issues are in the format of a miniature sheet of four stamps. The new miniature sheets were designed by the graphic artist Barnabás Baticz using photographs by Tibor Jakab and István Fűzi, and produced by the banknote printing company Pénzjegynyomda Zrt.
The new issues will be on sale in first day post offices and at Filaposta in Hungary from 3 June while stocks last, but may also be purchased from Magyar Posta’s online store.

• Heves Chess Museum (Heves, Hunyadi u. 2)
The Chess Museum opened on 24 February 1987 but collecting its material began many years beforehand in 1958 and continues to this day. Until now approximately 100,000 visitors from over 50 countries have viewed the collection. The oldest piece is a complete set from Seville dating from 1750. Some of the collection’s special chess sets deserve mention such as the ivory set from Morocco, the sandalwood set from India, the ebony set from Tanzania, the Kyrgyz folk art, agate set with a marble table, a ceramic set and a set designed for blind chess players. The collection also includes medals, memorial flags as well as video and voice recordings, and the world literature of chess.
• Ibafa Pipe Museum (Ibafa, Arany János u. 2)
The Pipe Museum’s collection was created in the 1960s and pipes relating the history of smoking were mainly acquired by purchase. The exhibition, which opened in 1968, has been re-arranged and modernised several times. Carved pumice pipes, porcelain pipes, a copy of the “ibafai fapipa” (the wooden pipe of Ibafa, well-known from a popular tongue twister), tobacco holders, lighting devices, a variety of clay pipes made in different places, Chinese opium pipes, marvellous examples of wooden pipes with rustic carving, match holders and pipe stems are on view. A unique piece is the large, turned wooden “social” pipe. A few pieces are associated with famous historic figures such as Ferenc Deák and Count Mihály Károlyi.