The theme of the miniature sheet with a surcharge issued by Magyar Posta in 2016 to support youth stamp collecting is the fire brigade. The new issue portrays some of the outstanding figures, inventions and vehicles from the history of firefighting in Hungary from its inception to the present day. Magyar Posta devotes the amount of the surcharge on two stamps of the miniature sheet, a total of HUF 150, to supporting youth stamp collecting. Forty thousand copies of the miniature sheet designed by the graphic artist Ferenc Svindt were produced by the Pénzjegynyomda printing company. The new issue is available at first day post offices and Filaposta in Hungary from 22 June, but may also be purchased from Magyar Posta’s online store. 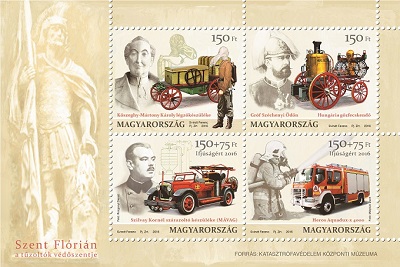 Károly Kőszeghi-Mártony (1783–1848), General of Artillery, military engineer. In 1829 Kőszeghi-Mártony made breathing equipment that used compressed air intended to protect sappers undermining fortifications. Compressed air from the wrought iron air cylinder worn on the back flowed into the trunk-like mouthpiece of the goat’s skin helmet where the pressure prevented outside gases from entering, thus improving breathing conditions. After filling, the equipment could be used for 30 minutes, and a specially designed air compressor enabled the cylinder to be refilled on the spot. Apart from the army, firefighters were using this equipment by the mid 19th century. This invention can be regarded as the forerunner of the compressed air breathing equipment used by miners, scuba divers and firefighters today.

Count Ödön Széchenyi (1839–1922), Chief Officer of the Budapest Fire Brigade, first President of the Hungarian National Fire Brigade Association. In 1862 Széchenyi learnt of the work of the first fire brigade in the world established in London. Motivated by this, he set up a modern fire brigade in Budapest. The Chancellery approved the statutes of the fire brigade in 1868. At first the fire brigade operated as a voluntary organisation in conjunction with the National Gymnastics Society and then, on 1 February 1870, a paid fire brigade of 12 men was established. Count Ödön Széchenyi was the chief officer of both organisations. In 1874 he travelled to Turkey at the invitation of the sultan to establish a fire brigade in Istanbul, where he remained until his death. For his outstanding achievements, he was created a pasha in 1880 even though he was a Christian.

Kornél Szilvay (1890-1957), Chief Technical Officer of the Budapest Fire Brigade, acting Chief Officer after 1945, a major figure in Hungarian firefighting and in the country’s technical history. Many inventions and patented technical innovations are associated with his name. His most notable contributions were his dry fire extinguisher and the more advanced version of this, and the dry extinguisher operated by gas turbine. The superstructure of the Heros Aquadux-X 4000 fire engine was entirely developed in Hungary using modern corrosion-resistant aluminium and stainless steel. The vehicle’s chassis, the rear superstructure and the technical firefighting system are Hungarian developments, and in keeping with the needs of the age it has a touch screen control system.In 1955 the Firefighting Museum was founded, which adopted the name the Central Museum of Disaster Management on 1 January 2012 when a new state organisation to manage disaster relief was established. The museum is located at Martinovics tér 12 in Budapest’s District X.