The building of Pesti Vigadó is 150 years old

The building of Pesti Vigadó is 150 years old

Magyar Posta salutes the headquarters of the Hungarian Academy of Arts, Pesti Vigadó, built 150 years ago, by issuing a commemorative stamp. The commemorative stamp with a face value of HUF 285 displays part of the ceremonial staircase with a painting by Mór Than entitled Fairy Ilona meeting her lover (fresco secco, end of the years 1860). The stamp was designed by the graphic artist Imre Benedek using the photo by Máté Török and produced by ANY Security Printing Company. The stamp will be on sale in first day post offices and at Filaposta in Hungary from 24 July while stocks last, but may also be purchased from Magyar Posta’s online store. 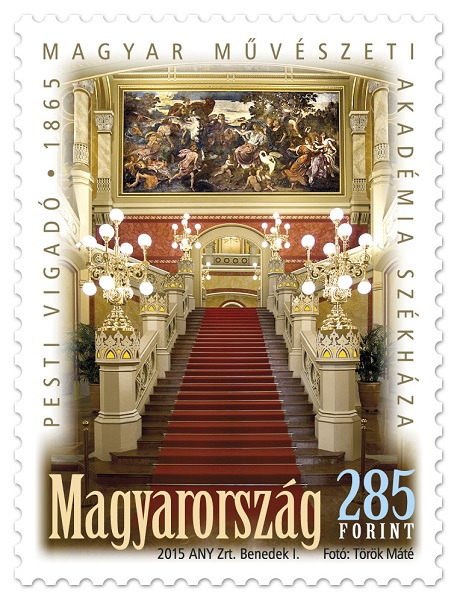 By the end of the Ottoman occupation in 1686, Pest lay in ruins. At that time, the stern stone blocks of a redoubt for the defence of the city stood in the area of today's Vigadó tér. In 1789 it was demolished so as to be replaced by a theatre building, which was not built for quite a while due to lack of funds. The Pest public did not cease demanding a ballroom and, finally, construction was started in 1829 on the basis of Mihály Pollack's plans. This building, the predecessor of today's Vigadó, proved to be one of the finest pieces of neoclassical architecture in Pest, and it came to be called the Redoute. The first ball was organised in January 1833. The Redoute was to have a short career; in May 1849 it fell victim to the artillery fire of the invading Austrian troops. In 1859 Frigyes Feszl was commissioned to design a new building, with which he sought to create a Hungarian style. The new edifice was opened in 1865. The façade of the palace is decorated by the Hungarian Coat of Arms and the likenesses of outstanding figures in Hungarian history. The pillar statues were sculpted by Károly Alexy. The frescos inside the building were painted by Károly Lotz and Mór Than. After the Austro-Hungarian Compromise of 1867, the city leased the Vigadó, which then hosted a variety of programmes, including city council meetings. For two or three decades following its opening, the Vigadó had a busy schedule of balls. The building of the Vigadó was seriously damaged in World War II, and its future was called into doubt. In 1968, construction work started with several of its parts demolished for complete transformation. To improve acoustics, prism lamps in plaster casing were affixed to the ceiling, lowering the room by five meters. The rebuilt Vigadó was opened to the public on 15 March 1980. Retaining only vestiges of its former splendour, the Vigadó was closed in 2004. In accordance with the Fundamental Law put into force in 2011, the Hungarian Academy of Arts became an independent public-law association. Two years later it acquired ownership of the Műcsarnok (Kunsthalle) and the Vigadó building, which was approaching the end of reconstruction. The formal opening ceremony of the renovated Pesti Vigadó took place on 14 March 2014. In today's Vigadó, the main auditorium shines almost in its original beauty. The main staircase, the lobby and the music room have been fully restored to their former grandeur. This jewel of the Danube bank was also provided with new spaces: a lecture and exhibition hall on 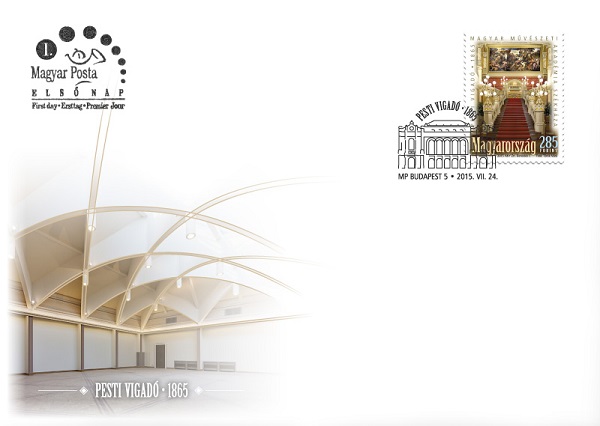