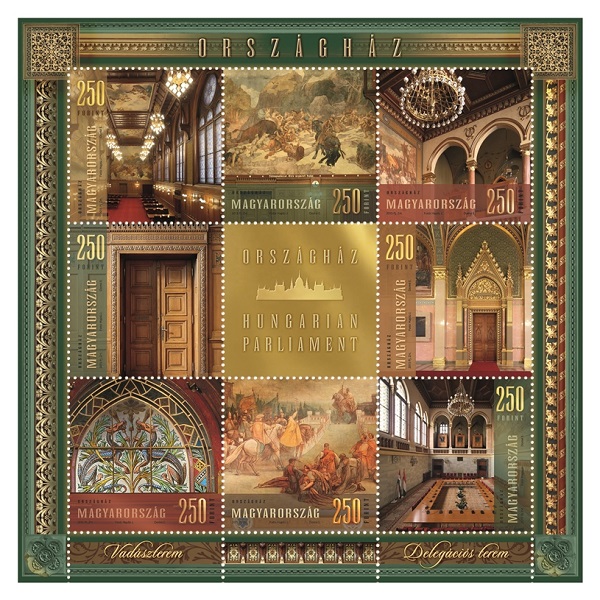 The Hungarian House of Parliament is one of the most beautiful public buildings in the world. Since 2012 its special architectural solutions have been presented in a new philatelic series. The commemorative miniature sheet issued in 2015 as part of this series contains eight stamps capturing the Hunting Hall and the Delegation Room and some of their distinctive features. The miniature sheet was designed by the graphic artist Eszter Domé using photographs by József Hajdú and produced by the banknote printing company Pénzjegynyomda. The new issue will be available while stocks last at first day post offices and Filaposta in Hungary from 1 October, but may also be purchased from Magyar Posta’s online store.

The Hungarian House of Parliament is the third largest building in the world used for this purpose. The Parliament’s large imposing dining hall, the Hunting Hall, is situated opposite the main staircase. Aladár Körösfői-Kriesch’s fresco on the southern wall recalls the beautiful verse of the poet János Arany “Next day a cry of beaters resounds in the valley. / On earth or sky the game are imperilled”. Lunch, which arrives from the kitchen in the basement via a dumbwaiter, is served in the unusual surroundings of the two king brothers Buda and Attila engaged in the princely pursuit of fighting a bison. In contrast with the drama of the chase, a more tranquil sight is offered by a fresco depicting fishing on Lake Balaton by an outstanding exponent of the Hungarian Secession on the northern side of the room.
At the end of the cross-wing of the building there is the broad and decorative delegation corridor, from which the Delegation Room opens. This room was the venue where, during the Austro-Hungarian Monarchy, the members of the committee comprised of Hungarian representatives and nobles discussed the Monarchy’s joint affairs as well as foreign policy, military and financial issues. On the long side above the entrance a large wall painting by Andor Dudits depicts the moment of the coronation sword stroke of Franz Joseph I, a reminder today of an important scene in the creation of the dual state. Source: budapestcity.org 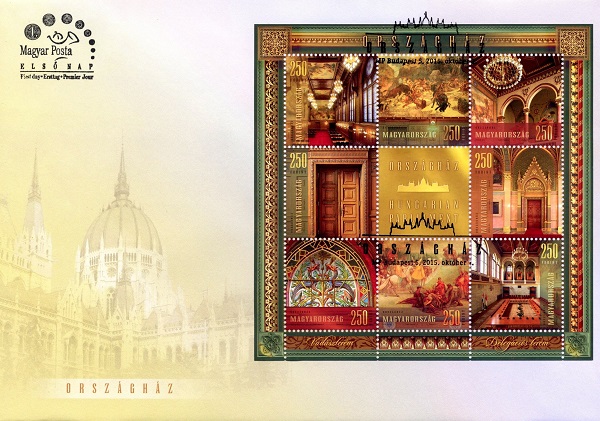