Anniversaries and events in space research

Anniversaries and events in space research 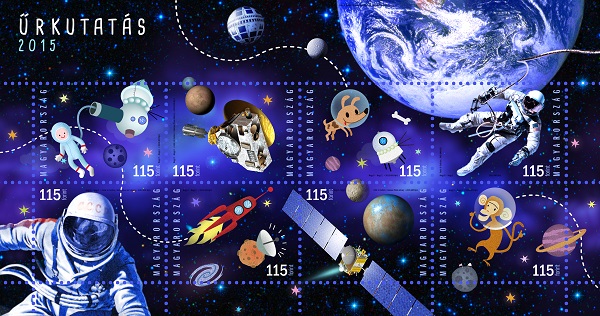 Magyar Posta is issuing a commemorative miniature sheet to record current space research anniversaries and events on postage stamps. The miniature sheet is intended to appeal to young people and thus its graphic design mixes reality and fiction, and photographic and child-like drawings. The miniature sheet, which contains eight stamps each with a face value of HUF 115, was designed by the graphic artists Péter Nagy and Zita Nagy and printed by ANY Security Printing Company using a combination of offset and UV methods.

The photo-based designs mark the 50th anniversaries of the spacewalks by Alexey Leonov and Edward White. On 18 March 1965 Alexey Leonov became the first person to step into space. He spent 12 minutes outside the spacecraft Voskhod 2. On 3 June the same year, the Gemini 4 astronaut Edward White spent 36 minutes in space outside his capsule. The stamps showing the two topical events depict the space probes New Horizons and Dawn. The former was launched on 19 January 2006 as the first mission in the New Frontiers program. During its flight it approached Jupiter, and reached Pluto on 14 July 2015. After this, the probe will visit one or more objects in the Kuiper Belt. Dawn is the ninth probe in the Discovery program, which will explore Ceres as part of its mission and went into orbit round the dwarf planet on 6 March 2015. Source: nyugat.hu
A special feature of the miniature sheet is that under UV light text describing the space research anniversaries and events becomes visible as do the planets of the Solar System and the stylised orbits of the subjects of the topical events, the dwarf planet Ceres and Pluto. 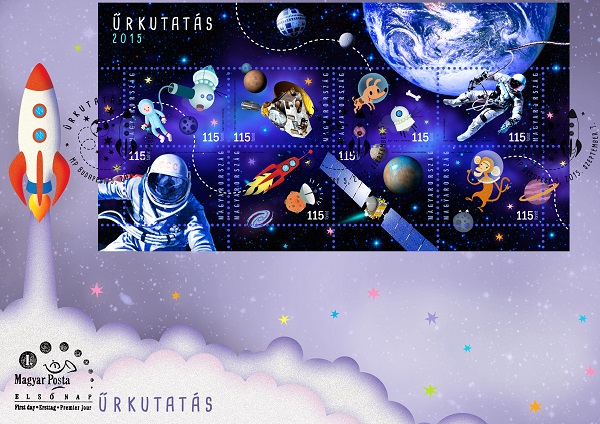