Magyar Posta is marking the largest festival for stamp collectors, Stamp Day, which this year is being held between 26 and 28 June 2015 in Tata, by issuing a stamp block with a surcharge and a commemorative set of stamps with two denominations. The new issue was produced by the printing company Pénzjegynyomda based on the designs of the graphic artist Barnabás Baticz using photographs by József Hajdú. The stamps will be on sale in first day post offices and at Filaposta in Hungary from 26 June while stocks last, but may also be purchased from Magyar Posta’s online store. Magyar Posta devotes the HUF 300 surcharge on each block to supporting organised stamp collecting in Hungary. 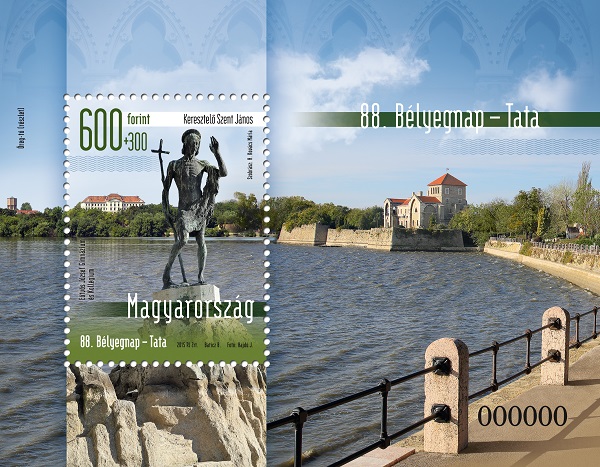 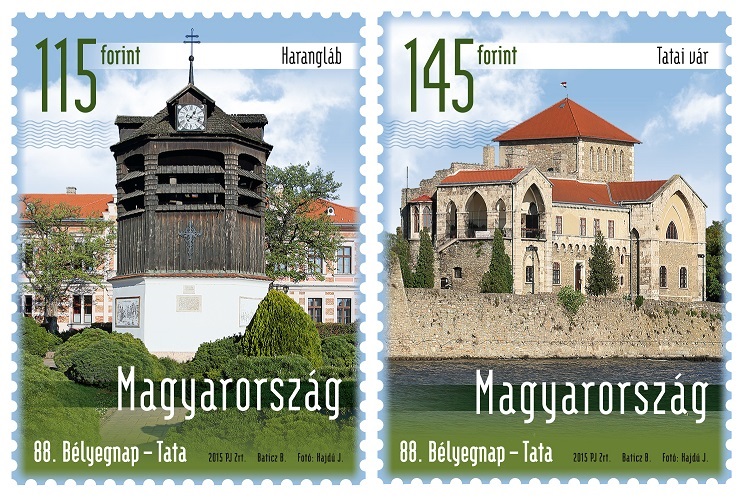 Tata (in Latin Dotis and in German Totis) lies on the river Által in northern Transdanubia, where the flat Kisalföld and the Transdanubian Mountain Range meet at the north-western entrance to the Tata valley separating the Gerecse and Vértes mountain ranges. The city of Tata has been inhabited since ancient times, which the archaeological finds suggesting the presence of pre-historic man here support. The favourable conditions and thermal springs in the locality have attracted man to this spot for thousands of years. Under the kings of the house of Árpád there was a royal estate here. Written records from the 9th century show that this was the site of a Benedictine Abbey. The name Tata first appeared in a written source in 1221. Tata, the “City of Living Water”, was chosen the Hungarian capital of biodiversity in 2010 in acknowledgement of the city’s attachment to natural values. (Source: tata.hu, wikipedia.org) A detail of Tata’s Old Lake is depicted together with Tata Castle on the numbered stamp block with a face value plus a surcharge of HUF 600+300. In the foreground of the block’s stamp design is a statue of Saint John the Baptist, and in the background the building hosting the Stamp Day event, the Eötvös József High School, is visible. In 2013 the city of Tata won the Europe Prize, which adorns the first day cover for the block. This prize and honours system was established by the Council of Europe in 1955 to reward local and regional authorities for their active promotion of the European ideal in international relations. Next to the Europe Prize, the Small Palace features as part of the composition. ● The denominations of the set of stamps show the Bell Tower (HUF 115) and Tata Castle (HUF 145). The block’s first day cover recalls the city’s long history of ceramic art through an example of 18th-century faience ware, including the “lobster” plate from the collection of the Kuny Domokos Museum in Tata. The cover also features a view of the city with the Holy Cross Parish Church of Tata as its main element. ● The commemorative postmark for the issue depicts a stylised drawing of Tata Castle. 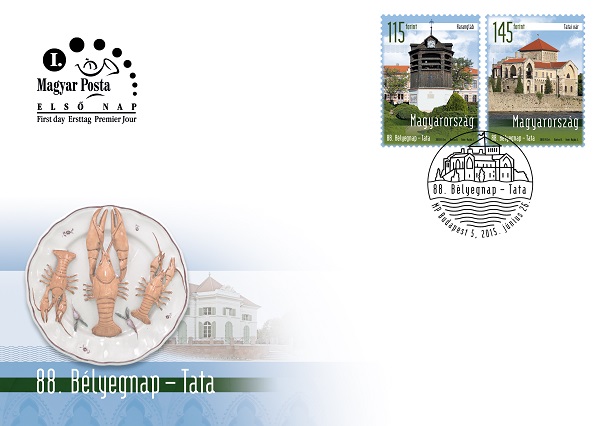 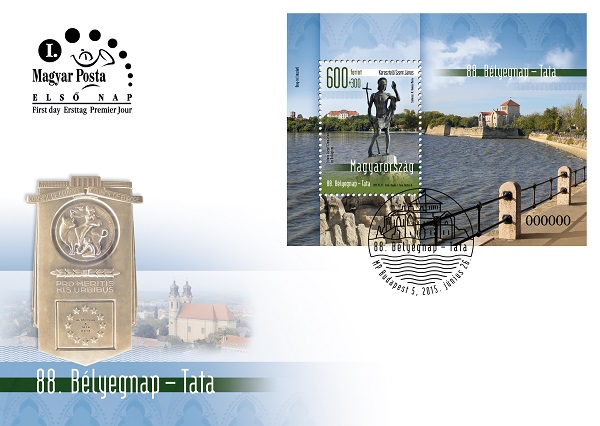