Magyar Posta is issuing a special stamp to mark the European football championship in France. 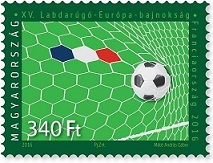 Magyar Posta is issuing a special stamp to mark the European football championship in France. The designs of the stamp, the first day cover and the postmark feature graphic compositions related to football.The new issue was produced by the printing company Pénzjegynyomda based on the designs of the graphic artist András Gábor Máté. The stamp will be on sale in first day post offices and at Filaposta in Hungary from 3 June, but may also be purchased from Magyar Posta’s online store.
TheEuropean football championship is organised by the Union of European Football Associations (UEFA) every four years for the national men’s teams of the member associations. It is the most prestigious event in European football and the most important UEFA event. The first finals were held in 1960, when it was known as theEuropean Nations Cup. The name was changed to the European Football Championship in 1968.Until 1976 only the 4 best teams took part in the final round. This was increased to 8 teams in 1980 and 16 in 1996. On 26 September 2008, UEFA decided that24 teams could take part in the finals of the European Football Championship in 2016, playing a total of 51 matches.On every occasion the teams reached the final tournament after playing qualifying rounds. The15th European Football Championship will be held in France between 10 June and 10 July 2016. The defending champions are Spain.Hungary will play at the European Championship for the first time in 44 years.  After beating Norway 1:0 away, they won 2:1 in the home leg of the play-off to secure their place at the finals to find Europe’s best. Hungary will play its first match in Group F against Austria in Bordeaux on 14 June, then takes on Iceland in Marseilles on 18 June and plays the last group match against Portugal in Lyon on 22 June.