In 2016 the 1,700th anniversary of the birth of Saint Martin of Tours is being celebrated, in honour of which Magyar Posta is issuing a commemorative stamp. The design shows a depiction of the saint and text from the medieval codex the Pannonhalma Evangelistarium, which is embellished with gold foil. Two hundred and forty thousand copies of the stamp with a nominal value of HUF 115 designed by the graphic artist Barnabás Baticz were produced by ANY Security Printing Company. The new issue will be available while stocks last at first day post offices and Filaposta in Hungary from 18 March, but may also be purchased from Magyar Posta’s online store. 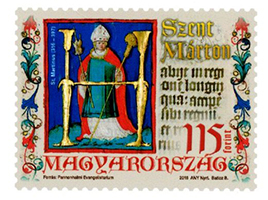 Saint Martin was born in the town of Savaria (now Szombathely) in the Roman province of Pannonia in 316. At the behest of his father, he joined the Roman army at the age of 15. He was noted for his good nature and helpfulness, which set him apart from his fellows. One bitterly cold winter’s night he met a shivering beggar at the gate of the town of Ambianum. He slashed his own mantle in two and gave one half to the man dressed only in rags. Not long afterwards, Christ appeared to him in a dream wearing the mantle he had given to the beggar and, as a result of this, in 339 at the age of 22 he was baptised and then became a monk. In 361 he founded his first monastery in Ligugé. In 371 he was chosen bishop of Tours and from then on devoted his life to preaching the gospel in Gaul. Even as a bishop he continued to live a simple monastic life. There are accounts of miracles and healing related to his activities. He died in 397. The personality of Saint Martin links monasticism with pastoral service, Pannonia with Gaul, and the ancient and medieval worlds with the present day, and joins the people who come into contact with his memory. He was a prominent saint in early and medieval Christianity, and Géza, Grand Prince of the Hungarians, chose Saint Martin to be the patron saint of the country’s first Benedictine abbey, Pannonhalma, in 996.