József Simándy was born 100 years ago

Magyar Posta is issuing a commemorative stamp in honour of the centenary of the birth of the opera singer and teacher József Simándy, winner of the Kossuth Prize, Artist of Merit and Artist of Excellence. Simándy was among the most famous Hungarian tenors, whose voice and figure were indelibly associated with the title role of Ferenc Erkel’s opera Bánk bán in the minds of several generations of Hungarians. He is portrayed playing this part on the stamp, with the building of the Opera House in the background. Two hundred thousand copies of the stamp with a face value of HUF 150 designed by the graphic artist Ágnes Berta were produced by the banknote printing company Pénzjegynyomda Zrt. The new issue will be available while stocks last at first day post offices and Filaposta in Hungary from 4 March, but may also be purchased from Magyar Posta’s online store. 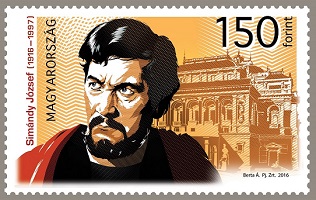 József Simándy was born on 18 September 1916 in Kistarcsa. After four years of elementary and four years of higher elementary schooling, he trained as a car mechanic at a taxi company, where he worked until the autumn of 1939. He studied singing first at Emília Posszert’s private school, and then attended the Academy of Music between 1943 and 1945. During the war years he was a member of the chorus at the Opera House. He premiered as a solo tenor in the role of Don José in Bizet’s Carmen in the National Theatre in Szeged. Simándy became a private singer working independently of the Opera House in 1947 and a life member of the Opera House in 1990. Between 1956 and 1960 he appeared at the Staatsoper in Munich. He taught at the Academy of Music between 1978 and 1986. The tenor’s presence, disposition, rich voice and inner strength made him particularly suitable for the heldentenor roles. He made numerous records and was highly acclaimed for his appearances in Europe’s major opera houses and concert halls as well as being a great favourite with domestic audiences. His name and memory is respected and treasured throughout the country. Interestingly, while the renowned singer wrote his surname Simándi, his fans and the singing profession changed the last letter to a “y” as a mark of respect because the surnames of noble Hungarian families often have this ending.Easter is pre-eminent among high days and holidays as it both welcomes the arrival of spring and is the celebration of the resurrection of Christ in the Christian world.  When Jesus entered Jerusalem, the crowds laid their clothes and palm branches on the ground to welcome the Saviour, and today in Hungarian churches branches of pussy willow are blessed in remembrance of this. The lambis another ancient symbol of Easter whose origin is also to be found in the Bible. Yet the Easter lamb is closely associated with the awakening of nature as this is the lambing season bringing new life to the world.  When Lent ends, winter also comes to a close, thus Easter is also a celebration of the rebirth of nature. As the days grow warmer, nature awakes. The first flowers push through the ground and soon the boughs of the trees are covered in blossom, bidding farewell to the bareness of winter as verdure returns to the world.  The decoration of churches with flowers and branches on the Holy Saturday morning for Easter likewise symbolises the rebirth of nature.