Magyar Posta is continuing the series on palaces launched in 2017 under the name Palaces in Hungary in 2018, which presents the country’s renowned and less well-known stately homes. Forty thousand copies of the miniature sheet of eight stamps, which was designed by the graphic artist Eszter Domé, were produced by ANY Security Printing Company. The new issue will go on sale on 3 September 2018 and be available in first day post offices and at Filaposta in Hungary from the date of issue, but may also be ordered from Magyar Posta’s online store. 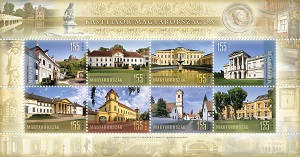 Episcopal Palace, Sümeg • The predecessor of the architecturally rich building, also noted for its painting heritage, already stood here in the second half of the 17th century. Built in the traditional provincial baroque style, today it is the only publicly owned baroque episcopal palace in Hungary.

Széchenyi Palace, Nagycenk • Built around 1750, this early neoclassical building is one of the few and most well-known Hungarian palaces to have remained in good condition. The building has undergone several reconstructions. The István Széchenyi Memorial Museum is housed in the middle section and in the west wing of the U-shaped building.

Károlyi Palace, Fehérvárcsurgó • Situated in Fejér county, the palace was built in the neoclassical and eclectic styles in the 19th century according to the designs of the architects Heinrich Koch and Miklós Ybl. The building complex at present functions as a 20-room hotel and can be visited by guided tour. It is surrounded by a 40-hectare arboretum-like park.

Sándor – Metternich Palace, Bajna • This splendid neoclassical palace stands at the highest point of this village in Komárom-Esztergom county and is often called the Devil's Horseman’s Palace after its 19th century owner Count Móric Sándor, who was renowned for his acrobatic feats of horsemanship. The building was given its current neoclassical form in 1834 by the architect József Hild.

Festetics Palace, Dég • This is one of Hungary’s most attractive neoclassical palaces, which is surrounded by the country’s largest English landscape garden. It was designed by an outstanding exponent of neoclassical architecture in Hungary, Mihály Pollack. Erected between 1810 and 1815, the building has several unusual architectural solutions such as the oval main hall being located in one corner of the palace instead of the central part.

Esterházy Palace, Tata • Its architectural features, ornamented interiors, 18th-century sentimental garden and English landscape garden make this late baroque palace on the shore of the Old Lake in Tata a special sight. It was designed by the noted local master builder Jakab Fellner and constructed between 1765 and 1780. The main palace building with corner towers is adjoined from the west by the ground-floor small palace that used to accommodate guests and other buildings, which together enclose an irregularly shaped space.

Camaldolese Hermitage, Majk • Despite small and large alterations and conversions over the centuries and its declining state of preservation, the hermitage today still retains its unique structural features and valuable artistic design. Next to the palace there are 17 separate dwellings for hermits surrounding a half-ruined church in the centre.

Károlyi Palace, Füzérradvány • On the outside the palace preserves a Romantic and eclectic appearance yet in its splendid halls visitors will find pure Italian Renaissance and early baroque interior features. Its fine stone carvings, marble fireplaces, doorframes and reliefs are the works of 16th- and 17th-century Florentine masters which once adorned Italian Renaissance palaces. These came to the palace at the end of the 19th century when its owner, László Károlyi, and his good lady decided to create an original Italian renaissance world around them.

The background of the miniature sheet is composed of a montage of the interiors and facades of the palaces as well as their parks.