Magyar Posta is continuing the presentation of Hungarian saints and blesseds in 2017. The Hungarian Saints and Blesseds V miniature sheet honours Saint Margaret, Saint Kinga and the Blessed Yolanda. The miniature sheet designed by the graphic artist Imre Benedek was produced by ANY Security Printing Company and will be available at first day post offices and Filaposta in Hungary from 1 September 2017, but may also be ordered from Magyar Posta’s online store. 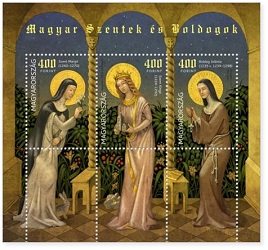 King Béla IV is regarded as the second founder of the state as he rebuilt the country after it was devastated by the Mongols in 1241-42. His daughters, Saint Margaret, Saint Kinga and the Blessed Yolanda, are shown on the stamps of the fifth issue of the Hungarian Saints and Blesseds series. Their lives were greatly influenced by the ideal of poverty prevalent at the time and the example of their aunt Saint Elizabeth, who died in 1231 and was canonised soon after in 1235.

Saint Margaret (1242 – 1270) was born in calamitous times. During the Mongol invasion her parents vowed to devote their child-to-be to God if their country was liberated from the Mongols. From the age of three she was raised by Dominican nuns in Veszprém and later lived in the convent on the Danube island which today bears her name. She spent her days working and her nights praying. According to legend, when she died, her body did not start decomposing for three weeks and had the scent of a rose. She is regarded as the model of self-discipline and Christian love. She was canonised by Pope Pius XII in 1943.

Saint Kinga (1224 – 1292) married Boleslaw V, Duke of Poland, which influenced Hungarian-Polish relations favourably. She helped Poland in many ways, contributing her whole dowry to defending the country against the Mongols, opening the salt mines at Wieliczka, founding a Poor Clares convent at Sandec (today Stary Sącz) and building hospitals and churches. After her husband’s death she withdrew to the convent at Sandec, where she was elected mother superior. She is the patron saint of Poland and Lithuania. She was canonised by Pope John Paul II on 16 June 1999.

Blessed Yolanda (1235 or 1239 – 1298) married Boleslaw the Pious, Prince of Kalisz and Gniezno, in 1256. After her husband’s death in 1279, she gave away her wealth to the Church and her relatives, and joined her widowed sister Kinga in the Poor Clares convent at Sandec. After her sister’s demise in 1292 she moved to the Gniezno monastery founded by her husband and became the abbess. Due to miraculous healings at her grave in the monastery’s chapel, she was beatified in 1827.