Magyar Posta is issuing a commemorative stamp to welcome the 100th anniversary of the foundation of the Lions Clubs International. The miniature sheet of postage stamps has been produced in 50,000 copies by ANY Biztonsági Nyomda Nyrt. based on the artwork created by graphic artist György Kara. The new issue will be available at first-day post offices and Filaposta from 3 April, but may also be ordered from Magyar Posta’s online store. 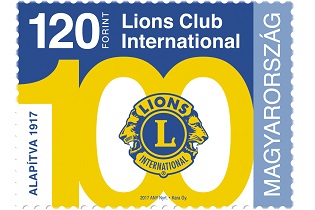 Lions Clubs International was founded in 1917 by the then 38-year-old Chicago businessman Melvin Jones with the determination to carry out - in addition to the basic activities of the local business club - goodwill work for the community and for the whole world. The initiative was accepted by Melvin Jones' group, the Business Club of Chicago. Having established contact with similar groups, the Association of Lions Clubs was founded in the United States in the same year. It became international in 1920 with the foundation of the first similar Canadian club.
In the one hundred years since its foundation, as a result of the goodwill work carried out and the related noble idea, the Lions movement today is active in 206 countries with 46,000 clubs and with approximately 1.4 million members, hence is the world's largest goodwill organisation organized as a club. Lions’ motto is ‘We serve’.
In the 100th year of its foundation, the Association’s support activities are organised around four objectives: the first is to provide support to young people and involve them in the Lions projects, that is, the promotion of the goodwill work among the youth in the Leo clubs, whereby they get involved in the Lions’ actions. The second objective is the struggle for the preservation of eyesight which includes support for both the blind and the visually impaired. The third objective is fight against starvation, which means the development of access to healthy food as well. The fourth objective is the protection of the environment and creating a healthier, more livable environment for all communities.
According to a research carried out in 2007 by the Financial Times, an American daily newspaper, from among 34 international goodwill non-governmental organisations the Lions Clubs International Foundation (LCIF) received the honorary title of the best NGO in the world. The reason the LCIF was awarded this honorary title is, among others, that it grants the total amount of the donations collected for the goodwill, i.e. 100%, to the needy.
Currently, in the 40 clubs located in Hungary approximately 900 members are working for the community, and their service covers all areas of support. The centennial motto of the 100-year-old international organisation is: ‘Where people are in need, the Lions are there to help’.