Magyar Posta is marking the 150th anniversary of the foundation of the Hungarian State Railways (MÁV Zrt.) by issuing a special souvenir sheet. Seventy thousand black-numbered perforated and two thousand red-numbered imperforated copies of the souvenir sheet designed by the graphic artist György Kara were produced by ANY Security Printing Company. The new issue will be available at first day post offices and Filaposta in Hungary from 6 July, but may also be ordered from Magyar Posta’s online store. 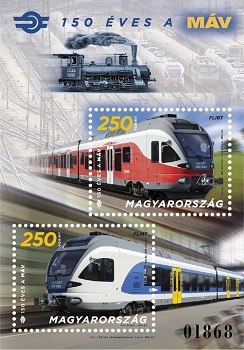 One hundred and fifty years is a short span in terms of the course of history but it is a decidedly long period in the life of a company. Nowadays, the railway is part of ordinary life, and tracks criss-cross the whole country and also link places in countries far and near. The trains of the national railway company travel not only in Hungary but to neighbouring countries as well. It is hard to imagine that there was a time when there were no state railway tracks in the country.

On 1 July 1868 the Hungarian government purchased the Hungarian Northern Railway operating the Pest–Salgótarján line, which had gone bankrupt. In 1869 the Ministry of Public Works and Transport ordered that the Hungarian Royal Railways should be the name of this railway administered by the State Treasury and other railway lines to be opened in the future. This was the predecessor of today’s company MÁV. From then on, the role of the state strengthened, and private railways that got into financial difficulties were helped or purchased by the state. Their lines and rolling stock were taken over by the Hungarian Royal Railways and a network began to develop. This network – a unity of railway vehicles, the staff, the service buildings and continuous innovation – has become an inseparable part of the country over the last one hundred and fifty years, which have often brought radical changes and difficult challenges also affecting the railway.

Today the vast majority of the main stations in Hungary are operated by MÁV and the company, as the country’s largest railway infrastructure manager, also operates the most stations and halts.

The company must constantly respond to the changes in passenger and freight transport and the consequent challenges of competitiveness by creating sustainable mobility.

The main elements of the design of the souvenir sheet are an early locomotive and two modern trains. The two stamps of the souvenir sheet both show a train from the company’s modern FLIRT multiple unit series, one in the red livery introduced in April 2007 and the other in the traditional blue design, which entered service in October 2014. In the top of the frame there is the 500 class IIIe steam locomotive number 2535 made by the Hungarian Royal State Iron, Steel and Machine Works (MÁVAG), which came into service on 31 May 1893. The first day cover shows the interior roof span of the Eastern Railway Station in Budapest, and the design of the special postmark uses MÁV’s jubilee logo.